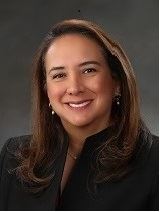 Alma D. Puente is a proud, life-long resident of the city of El Monte. Mrs. Puente counts herself blessed to be able to still live in her childhood home with her husband of 20 years, their three sons, and her parents. Mrs. Puente is the proud daughter of an immigrant mother who found a soft place to land in the city of El Monte. Mrs. Puente’s mother worked in the Arroyo High School cafeteria for over two decades and her father worked for an industrial adhesive manufacturing company, so Mrs. Puente was raised with a deep appreciation for the hardworking people of El Monte.

Mrs. Puente earned her Bachelors of Arts in English with an emphasis on Pre-Law and a minor in Legal Studies from Chapman University. During the Fall of 1995, Mrs. Puente had the privilege of serving as an intern at the U.S. Supreme Court in preparation for the career that she was excited to begin.

In 2004, Mrs. Puente graduated from law school with a Juris Doctorate degree. She is familiar with keeping plates spinning and handling many moving parts with excellence, because she worked full-time during law school while she and her husband were expecting their first child, and she passed the California State Bar on her first attempted, while she was also tending to her then 18-month-old toddler.

Over the course of her 16-year legal career, Mrs. Puente has had the distinguished honor of being admitted to practice before the Supreme Court of California, U.S. District Court for the Central District of California, U.S. Court of Appeals for the Ninth Circuit, and the Supreme Court of the United States of America. She is a member of the LA County Bar Association (“LACBA"), Mexican-American Bar Association (“MABA”), and the American Immigration Lawyers Association. She also volunteers with KIND - Kids in Need of Defense, MABA, LACBA and she has worked with children in the foster care system as a Court Appointed Special Advocate (“CASA”). All of this hard work has culminated in her owning her own firm, The Law office of Alma D. Puente, focusing on immigration law, for the last 11 years. Her practice was proudly founded and remains in El Monte.

One of her most recent honors has been being invited onto the Board of Directors for the Immigration Resource Center of San Gabriel Valley. This most recent invitation has given Mrs. Puente an opportunity to serve her community in the work of justice for the underrepresented and often mistreated population of non-citizens in the San Gabriel Valley.

Being elected to the El Monte was such a precious honor for Mrs. Puente. As someone who deeply values integrity and hard work, she looks forward to carrying out her duties to the city that she loves so deeply. Mrs. Puente’s goal is to engage with El Monte’s residents, businesses and City leaders to help bridge the gap so our City – and our people – can thrive again!